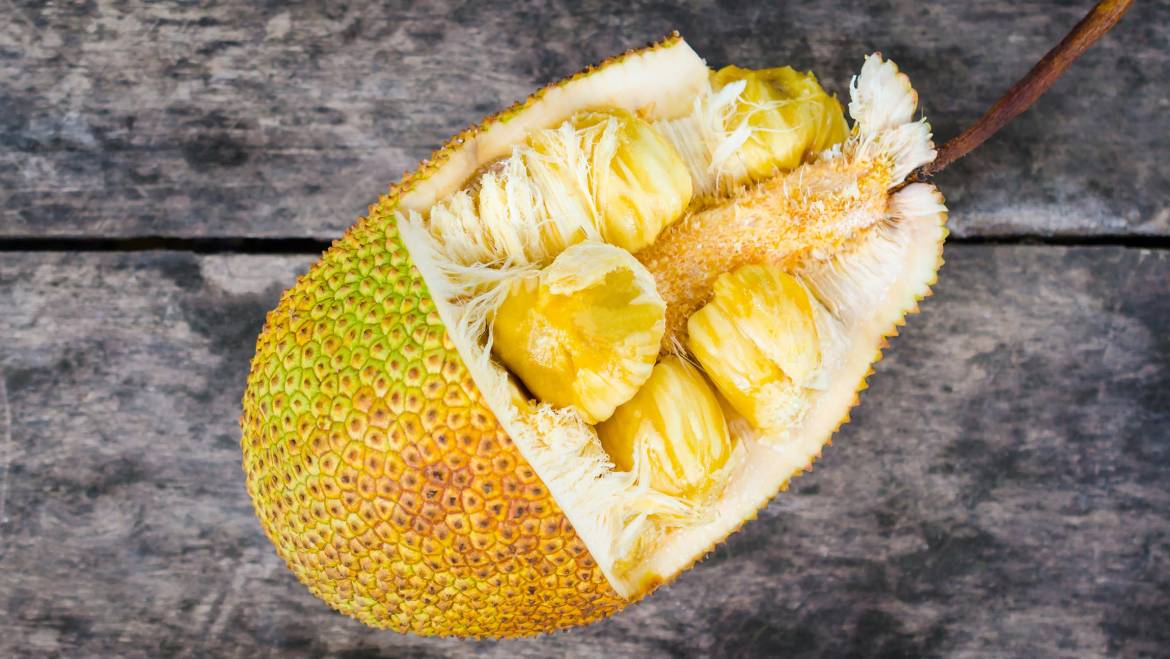 According to Wikipedia – jackfruit (Artocarpus heterophyllus), also known as jack tree, is a species of tree in the fig, mulberry, and breadfruit family (Moraceae). Its native range is unknown but most sources place its center of origin in the region between the Western Ghats of southern India to the rainforests of Borneo.

The jack tree is well-suited to tropical lowlands, and it bears the largest fruit of all trees; reaching as much as 55 kg (120 lb) in weight, 90 cm (35 in) in length, and 50 cm (20 in) in diameter. A mature jack tree can produce about 100–200 fruits in a year. The jackfruit is a multiple fruit composed of hundreds to thousands of individual flowers, and the fleshy petals of the unripe fruit are eaten. The immature fruit (unripe, commercially labeled as young jackfruit) has a mild taste and meat-like texture that lends itself to being a meat substitute for vegetarians and vegans. The ripe fruit can be much sweeter (depending on variety) and is more often used for desserts.

Jackfruit is commonly used in South and Southeast Asian cuisines. Both the ripe seeds and the unripe fruit are consumed. The jack tree is widely cultivated throughout tropical regions of the world. The jackfruit is the national fruit of Bangladesh and Sri Lanka, and the state fruit of the Indian states of Kerala and Tamil Nadu.

The flavor of the ripe fruit is comparable to a combination of apple, pineapple, mango, and banana. Varieties are distinguished according to characteristics of the fruit flesh. In Indochina, the two varieties are the “hard” version (crunchier, drier, and less sweet, but fleshier), and the “soft” version (softer, moister, and much sweeter, with a darker gold-color flesh than the hard variety). Unripe jackfruit has a mild flavor and meat-like texture and is used in curry dishes with spices in many cuisines. The skin of unripe jackfruit must be peeled first, then the remaining jackfruit flesh is chopped in a labor-intensive process into edible portions and cooked before serving. The final chunks resemble prepared artichoke hearts in their mild taste, color, and flowery qualities.

The cuisines of many Asian countries use cooked young jackfruit. In many cultures, jackfruit is boiled and used in curries as a staple food. The boiled young jackfruit is used in salads or as a vegetable in spicy curries and side dishes, and as fillings for cutlets and chops. It may be used by vegetarians as a substitute for meat such as pulled pork. It may be cooked with coconut milk and eaten alone or with meat, shrimp or smoked pork. In southern India, unripe jackfruit slices are deep-fried to make chips.